Azure Key Vault is used to safeguard and manage cryptographic keys, certificates and secrets used by cloud applications and services (you can still consume these on-premise though). This allows other application, services or users in an Azure subscription to store and retrieve these cryptographic keys, certificates and secrets.

Once cryptographic keys, certificates and secrets have been stored in a Azure Key Vault access policies can be configured to provide access to them by other users or applications.

Azure Key Vault also stores all past versions of a cryptographic key, certificate or secret when they are updated. So this allows easily rolling back if anything breaks.

Before getting started there is a few things that will be needed:

The first task is to customize and install the Azure Key Vault using the following PowerShell script.

It will take about 30 seconds for the Azure Key Vault to be installed. It will then show up in the Azure Subscription: 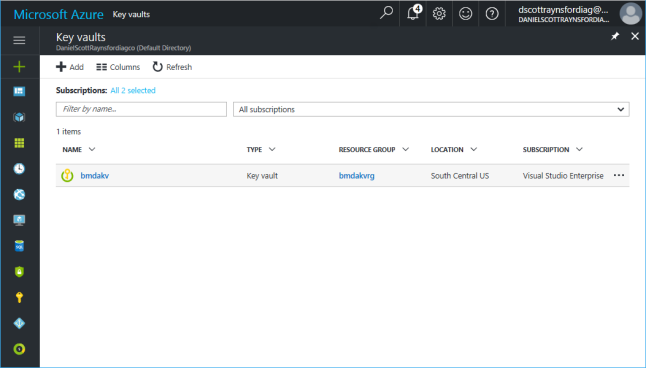 Once the Azure Key Vault is setup and an administrator or two have been assigned, other access policies will usually need to be assigned to users and/or application or service principal.

If you only have the full name of the user then you’ll need to look up the Object Id for the user in the Azure AD:

To create an access policy to allow a service principal or application to get and list cryptographic keys if you know the Application Id (a GUID):

Changing the values of the PermissionsToKeys, PermissionsToCertificates and PermissionsToSecrets parameters in the cmdlets above allow different permissions to be set for each policy.

The available permissions for certificates, keys and secrets are: 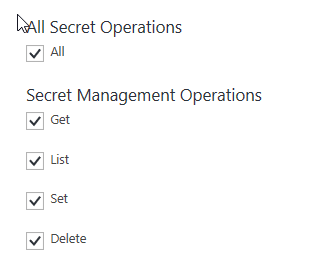 Secrets can be created, updated, retrieved and deleted by users or applications that have been assigned with the appropriate policy.

To create a new secret, use the Set-AzureKeyVaultSecret cmdlet:

This will create a secret called MyAdminPassword with the value P@ssword!1 in the Azure Key Vault.

The secret can be updated to a new value using the same cmdlet:

Additional parameters can also be assigned to each version of a secret to control how it can be used:

To retrieve the latest (current) version of a secret, use the Get-AzureKeyVaultSecret cmdlet:

This will assign the stored secret to the variable $secretText as a SecureString. This can then be passed to any other cmdlets that require a SecureString.

To list all the versions of a secret, add the IncludeVersions parameter:

To retrieve a specific version of a secret, use the Get-AzureKeyVaultSecret cmdlet with the Version parameter specified:

Finally, to remove a secret use the Remove-AzureKeyVaultSecret cmdlet:

In the next part of this series I’ll cover using Azure Key Vault to use and manage cryptographic keys and certificates. Thanks for sticking with me this far.